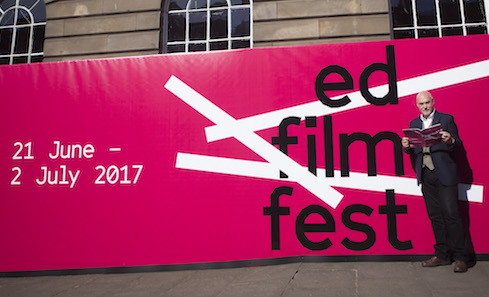 Edinburgh International Film Festival is celebrating a successful 71stedition, which saw a sixth successive year of increased audience numbers, an array of high profile talent in attendance, and widespread support across the city.

The Festival showcased 151 features from 46 countries and included 17 World Premieres, 12 International Premieres, 9 European Premieres and 69 UK Premieres reaching more than 53,000 festival-goers across the 12-day period, and an additional 20,000 people enjoying the Festival's weekend of outdoor screenings, as part of Film Fest in the City – the sunny weather and fantastic films doubling the 2016 figures.  More than 400 filmmakers were in attendance this year to support their films, with more than 200 accredited press and almost 600 industry delegates also present.

Celebrating Scotland’s Year of History, Heritage and Archaeology, and the Festival’s 70th Anniversary Year, ed film fest memories city-wide photography exhibition reached over 300,000 people between 31 May and 2 July. The exhibition featured a selection of rarely seen images from the Festival’s archives, at Festival Square, St Andrew Square and the Old College Quad.

Mark Adams, EIFF Artistic Director said: "It has been another amazing EIFF and it has been satisfying and often humbling to receive such a great response from filmmakers, guests and the audience. The city always makes EIFF guests feel welcome and this year there was a real buzz and sense of enthusiasm and appreciation around the Festival. Roll on 2018!"

Ken Hay, CEO Edinburgh International Film Festival, added: “EIFF is unashamedly international and outward-looking in its programming and its reach, with 59 countries represented through the programme, our filmmaker and industry guests, and our truly multi-national team delivering the event.  We’re delighted that audiences and guests have responded so positively to the programme and the broader Festival experience, and are thrilled to see a further increase in admissions.”

Robbie Allen, Senior Screen Executive at Creative Scotland, said: “Featuring an impressive array of films from around the world, great audience and industry events, creative discussion, and an excellently curated retrospective, EIFF's 70th anniversary edition has captured the imagination of local and international audiences, entertaining and enthralling us all.”

About Edinburgh International Film Festival: Established in 1947, Edinburgh International Film Festival is renowned around the world for discovering and promoting the very best in international cinema - and for heralding and debating changes in global filmmaking. Intimate in its scale, ambitious in its scope, and fuelled by pure passion for cinema in all its manifestations, EIFF seeks to spotlight the most exciting and innovative new film talent, in a setting steeped in history. Notable films premiered in recent years have included: HUNT FOR THE WILDERPEOPLE, AMY, FINDING DORY, 45 YEARS, A MOST WANTED MAN, COLD IN JULY, THE IMPOSTER, BRAVE, TABU, THE HURT LOCKER, MOON, FISH TANK, LET THE RIGHT ONE IN, MAN ON WIRE, CONTROL, KNOCKED UP, RATATOUILLE, LITTLE MISS SUNSHINE and BILLY ELLIOT.

EIFF is supported by Creative Scotland, the BFI (with National Lottery funding), and the Scottish Government through the Edinburgh Festivals Expo Fund, the City of Edinburgh Council, and EventScotland. The Centre for the Moving Image (CMI) was established in 2010 with a mission to be at the forefront of the development of a vibrant and successful film and moving image industry and culture across Scotland and beyond. The CMI currently comprises EIFF, Filmhouse in Edinburgh and the Belmont Filmhouse in Aberdeen. The Edinburgh International Film Festival Limited is a company registered in Scotland No: SC132453.  It is a subsidiary of the Centre for the Moving Image (CMI) which is a company limited by guarantee with charitable status with Scottish Charity No. SC006793.