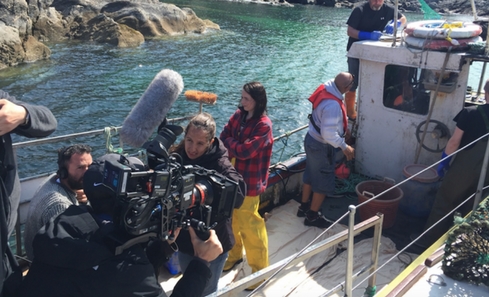 Supported by the National Lottery through Creative Scotland and the British Film Institute, the talent development programme is targeted at Scottish based writers, directors and producers with the imagination to create thrilling, engaging stories to share with international audiences. The following six shorts will receive individual budgets of £15,000 and go into production later this year:

The six shorts were selected from 20 filmmaking teams who undertook a series of development workshops and master classes throughout July focussing on story, script and production led by producer Paul Welsh, DigiCult, and supported by producer Carolynne Sinclair Kidd, Hopscotch Films. The 20 teams pitched their productions to an industry panel comprising of representatives from Scottish Film Talent Network, the Centre for the Moving Image, DigiCult, Hopscotch Films and Creative Scotland.

Holly Daniel, Executive at Scottish Film Talent Network, said: “Short films provide an amazing launchpad for emerging filmmakers to showcase their voices and it was amazing to see such a huge number of talent applying to Scottish Shorts this year. The standard was tremendously high and following a difficult selection process, we are thrilled to now be able to offer these six teams the opportunity to bring their exciting and original stories to the big screen.”

Ross Mckenzie, Screen Officer at Creative Scotland, said: “This year presents a continuing high standard of projects supported through Scottish Shorts programme. The six projects commissioned for production clearly demonstrate the range of voices and stories coming from Scotland, and we are delighted to be offering these teams the opportunity to realise their vision and make high quality films that will showcase Scotland’s creativity to the world, and to take the next step in their careers as filmmakers.”

This is the third edition of the Scottish Shorts programme under SFTN. Previous participants have benefitted from the production of their first funded work to help progress their careers.

Sam Firth, director of 2016 Scottish Short Creeling said: “The SFTN new talent scheme was a fantastic opportunity to move across from documentary and try directing my first piece of fiction. I worked with a really talented cast and crew which was an amazing experience.”

Supported by Creative Scotland and BFI – with National Lotteryfunding – SFTN forms the Scottish element of the BFI Network, designed to discover, nurture and advance new and emerging filmmaking talent from across the UK. SFTN is a consortium made up of the Centre for the Moving Image (CMI), DigiCult and Hopscotch Films.

Matimba Kabalika, BFI NETWORK Manager said: “A major priority for us is to discover and nurture talent from all across the UK, which is why working with partners such as Scottish Film Talent Network is crucial. It’s exciting to see such a strong group of filmmakers this year, and we look forward to seeing them bring their stories to the screen.”

An emotionally repressed young man is challenged by disruptive outsiders to face up to his leporine delusion.

Shaun Hughes said: "Our team are delighted to have been selected by SFTN to make Bunny. The development process has been a rewarding experience and we look forward to progressing with the support of Creative Scotland and the BFI. Thanks to all involved for the exciting opportunity to work with institutions of such high calibre, and to form bonds that will continue into our future careers."

Faced with a corpse, a restless, and lonely young carer finds the attention and money she needs.

Joe Carter said: Morna, the team and I are super excited to have this opportunity to bring Isla, our twelve-year-old character to life. With a largely North Eastern production team onboard it'll be great to bring Elgin to the silver screen!

My Loneliness is Killing Me

Two men, each lonely in their own way, hook-up for a brief but revealing sexual encounter.

Tim Courtney said: "It's still sinking in - Scottish Shorts has been a launchpad for a great deal of film talent down the years, and it’s a privilege to be a part of it. On behalf of the team, I'd like to thank SFTN for giving us this opportunity to tell our culturally provocative story.”

Excluded from a Highland battle re-enactment, a middle-aged Warrior Queen must rediscover her courage and defend her family’s honour.

Robin Haig said: “Our team of female creatives are utterly delighted Slingshot has been commissioned by SFTN. It's a story about courage, set in the Highlands, and we can't wait to answer the battle cry and bring it to the screen!”

A religious fanatic must subject his beloved indoctrinated niece, who’s drifting away from their faith, to a gruesome baptism, in order for her to become a true follower and ultimately be saved from an impending doomsday flood.

Josefa Celestin said: "We’re delighted that SFTN commissioned Treading Waters and trusts us to deliver the controversial and visually challenging story of Nicholas & Seren. We can’t wait to get our feet wet!”

Not so far in the future, a privileged gentleman is constantly pampered  by machines. Against the advice of his robot butler, his orderly, automated existence is thrown into chaos when he chooses to pursue a free-spirited woman.

Simon Biggs said: “This is a rare to chance to dedicate time to a personal project, so I would like to thank the SFTN for this opportunity, and look forward to the challenge ahead.”

SFTN is a consortium made up of the Centre for the Moving Image (CMI), DigiCult and Hopscotch Films. SFTN represents Scotland in the UK-wide BFI NETWORK initiative as it connects the UK’s film talent development agencies. Scottish Film Talent Network consortium has been awarded the contract by Creative Scotland and is supported by BFI. For further information please visit www.scottishfilmtalent.comand follow us at @SFTNetwork

BFI NETWORK is a UK-wide programme discovering and supporting the next generation of filmmaking talent on the way to making their first feature.

Films made by filmmakers who have participated in the BFI NETWORK have attracted award nominations, including three BAFTAs and an Oscar®.  Find out more at www.bfi.org.uk/network.