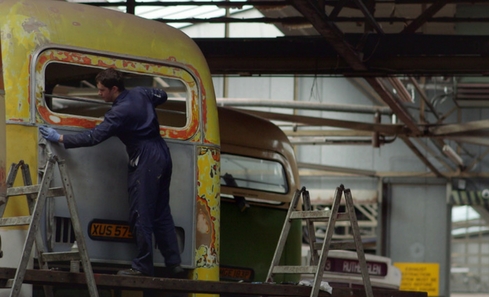 Listen to Bridgeton, a short film by Glasgow director Callum Rice has been chosen to screen at BFI Southbank and on BBC Four as part of a celebration of the 75th anniversary of Listen to Britain, Humphrey Jennings and Stewart McAllister's poetic collage of British life.

One of 12 short documentaries from across the UK as part of the Listen to Britain 2017 project, commissioned by BBC Fourand BFI and supported by the National Lottery through Creative Scotland’s Screen Funding, Listen to Bridgeton explores the last Corporation Bus Garage in Glasgow and examines how our lost industrial past is providing hope for the future.

The act of restoration at the bus garage is tangible. Within this vast impressive space, restoring vehicles with care is emblematic of individuals rebuilding their lives.

Callum Rice, Director, Listen to Bridgeton said: “I’d like to thank all at the Glasgow Vintage Vehicle Trust and the Back on the Road scheme for their help and assistance in enabling me to make this film.

“To be given the opportunity to make a film in response to Humphrey Jennings’ masterpiece was a real honour. I am very grateful for the continued support I received from Creative Scotland.”

Leslie Finlay, Screen Officer at Creative Scotland said: “We congratulate Callum and the whole Listen to Bridgeton team on this fantastic achievement. It has been exciting to watch Callum’s progress since taking part in the Scottish Documentary Institute’s Bridging the Gap programme. We are particularly pleased that audiences across Scotland and the UK will have the opportunity to see Listen to Bridgeton when it is broadcast later this month.”

The film was produced by Barbara Orton of True TV & Film and exec produced by Debbie Lee of Wingspan Productions. The documentary will be shown on BBC 4 on Sunday 24 September from 9pm, as part of Listen to Britain 2017. Following a screening of the original 1942 film: Listen to Britain, 12 short documentary films will be broadcast, all inspired by the original work, yet will reflect how Britain looks and sounds today.

Listen to Bridgeton is the follow-up to Rice’s documentary debut, Mining Poems or Odes which was nominated for a BAFTA in 2016.

Callum Rice is a director and photographer based in Glasgow who works between alternative printing and the moving image.

After graduating from the Glasgow School of Art, Callum directed his first short film, Mining Poems or Odes, supported by Creative Scotland for The Scottish Documentary Institute.

It was subsequently awarded the BAFTA Scotland Best Short Film Award in 2015, nominated for Best Short Film at the EE British Academy Film Awards 2016 and was selected to screen at the Sundance Film Festival 2016.

Producer Barbara Orton runs True TV and Film, a BAFTA award winning independent production company based in Glasgow. She has been making human interest, social and cultural documentaries and factual films for many years in Scotland, UK, Cuba, America, South Africa, Kenya, Egypt, Europe and numerous places in between for BBC, Channel 4 in the UK and for International broadcasters.

The film trailer can be viewed on Vimeo.