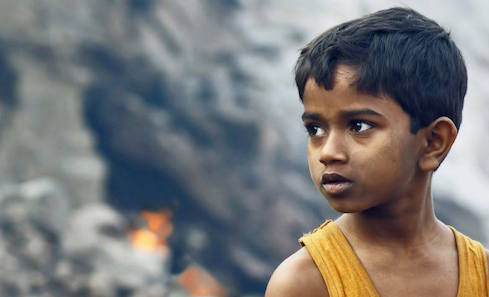 The film focuses on the humanitarian and ecological disaster in Jharia. Jharia is India’s largest and most productive open-cast coal mines and also home to over 700,000 who survive by picking coal in unstable and dangerous conditions.  One of the most dangerous places on earth, the locals suffer respiratory problems and live in houses precariously built on unstable ground where fires rage underground and smoke and dangerous fumes belch from cracks in the earth.

Aptly titled Mouth of Hell, the short tells the story of Anant, an 8 year old boy who scrapes a living picking coal and selling it at the local markets to try and feed himself and his sick mother. Life changing events unfold as Anant stumbles unexpectedly upon a wallet containing 5000 rupees.

On being nominated in the British Short Film category for a BAFTA Film Award, Writer/director, Samir Mehanovic, commented: "This BAFTA nomination is a huge honour and I am grateful to Creative Scotland for supporting the project as well as the amazing crew who worked on the film. I hope the attention the film garners will put focus on the plight of those living above a burning oven and the ecological disaster that humanity is facing with open cast mines. India and China are the biggest Carbon Monoxide producers in the world.”

The short received support from the National Lottery through Creative Scotland’s Film & TV Production Fund. Ross Mckenzie, Screen Officer at Creative Scotland, commented: “Creative Scotland are delighted to have been part of this beautifully shot and deeply moving tale set in the Jharia coal mines.  Samir, Michael and their crew managed to pull the film together in one of the world’s most challenging locations, and it’s testament to their hard work and commitment for telling the story of so many people in Jharia, that the film has been put in the spotlight and nominated in the Best Short Film category at this year’s BAFTAs. We wish them the very best of luck on the night.”

The EE British Academy Film Awards take place on Sunday 12 February at the Royal Albert Hall, London. The ceremony will be hosted by Stephen Fry and will be broadcast exclusively on BBC One and BBC One HD. The ceremony is also broadcast in all major territories around the world.

Mouth of Hell received £50,000 from the National Lottery through Creative Scotland’s Film & TV Production Fund. Mouth of Hell was written and directed by Samir Mehanovic and produced by Michael Wilson, Ailie Smith and Mark Evans. For further information about the Mouth of Hell please visit: www.mouthofhellfilm.com/about

About Samir Mehanović
Bosnian born and Edinburgh based, Samir Mehanović is a film and theatre director, producer, and screenwriter. He has previously received the BAFTA Scotland award for Best First Time Director for the short film The Way We Played, which has screened at over 30 festivals and his recent documentary The Fog of Srebrenica won the IDFA Special Jury Award for Mid-Length Documentary at Amsterdam’s International Documentary Film Festival (IDFA).

About Michael Wilson
Michael Wilson has worked in Film and Television production for 15 years.  His feature credits include Elizabeth: Golden Age, Dear Frankie and Harry Potter and the Philosophers Stone, his TV credits include Rebus, MI High and Field of Blood. Michael is currently working on Outlander as production manager. Making Mouth of Hell in India ranks amongst the most difficult and the most rewarding of his filming experiences.

About BAFTA
The British Academy of Film and Television Arts is an independent charity that supports, develops and promotes the art forms of the moving image by identifying and rewarding excellence, inspiring practitioners and benefiting the public. In addition to its Awards ceremonies, BAFTA has a year-round programme of learning events and initiatives – featuring workshops, masterclasses, scholarships, lectures and mentoring schemes – in the UK, USA and Asia; it offers unique access to the world’s most inspiring talent and connects with a global audience of all ages and backgrounds. BAFTA relies on income from membership subscriptions, individual donations, trusts, foundations and corporate partnerships to support its ongoing outreach work.  For further information visit www.bafta.org or www.facebook.com/bafta and https://twitter.com/BAFTA.

About Creative Scotland
Creative Scotland is the public body that supports the arts, screen and creative industries across all parts of Scotland on behalf of everyone who lives, works or visits here.  We enable people and organisations to work in and experience the arts, screen and creative industries in Scotland by helping others to develop great ideas and bring them to life.  We distribute funding provided by the Scottish Government and the National Lottery. For further information about Creative Scotland please visit www.creativescotland.com.  Follow us @creativescots and www.facebook.com/CreativeScotland