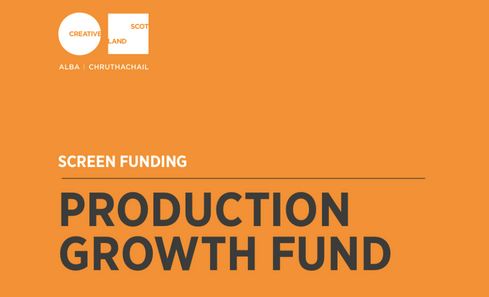 The new figures come after Creative Scotland launched this year’s PGF with an increased pot of £2 million to encourage film and TV productions to base themselves in Scotland.

Due to higher demand, guidelines have been updated to ensure that even greater benefits are secured for Scotland including increased spend, training and co-production opportunities.

New productions supported by PGF include TV drama series The Victim, and Ordeal by Innocence, filmed on location on the Ardgowan Estate in Inverclyde. Feature films include Gareth Jones, which stars James Norton and Vanessa Kirby and has been shooting in Edinburgh, Tell It To The Bees, with a cast lead by Anna Paquin, Outlaw King directed by David Mackenzie and starring Chris Pine as Robert the Bruce, and Wild Rose, featuring Julie Walters and Jessie Buckley.

Creative Scotland is currently establishing a new Screen Unit - backed with £10 million Scottish Government investment – with a target to double production spend and increase Scottish company growth over a period of five years.

Culture Secretary Fiona Hyslop said: “The Production Growth Fund has become a vital tool to support our screen sector by ensuring a steady stream of work for the highly skilled people who work in the industry.

“These new figures show the benefit to Scotland’s economy significantly outstrips the original investment, demonstrating the value in this programme.

“In a highly competitive international market, the fund has helped to attract major productions to base themselves in Scotland, in return for a guaranteed spend on jobs and the local economy.

“With overall production spend increasing by more than 30% last year to another record high, Scotland’s film and TV industry is in excellent health. The new Screen Unit will build on that and drive forward even more benefits for Scotland’s facilities and crews.”

Since October 2015, Scottish Government and Creative Scotland, through the National Lottery, have allocated £3.7m through the PGF to attract film and high-end television productions to come to, or stay, in Scotland.

The PGF incentivises producers to base productions in Scotland in return for guaranteeing a spend on jobs and the local economy.

All productions in receipt of funding from Creative Scotland are required to meet a certain level of Scottish spend and provide an audited cost statement detailing the Scottish spend. The fund guidance states that the ratio of the estimated Scottish spend to the level of funding requested should be a minimum of 8:1.

The PGF is in addition to screen funding of around £4 million awarded by Creative Scotland from Lottery Funding each year, aimed at projects with links to Scotland.

The Screen Unit is being led by and situated within Creative Scotland with support from partners, Highlands and Islands Enterprise, Skills Development Scotland, Scottish Enterprise and the Scottish Funding Council.