Four world premieres of feature films and documentaries from Scotland will feature at Toronto International Film Festival in September.

OUTLAW KING is the largest feature film to be made in Scotland to date, developed and produced by some of Scotland’s foremost filmmakers, director David Mackenzie and producer Gillian Berrie.

The Netflix and Creative Scotland backed feature OUTLAW KING sits alongside three other exciting titles from Scotland to receive their World Premieres at the festival; TELL IT TO THE BEES, WILD ROSE and FREEDOM FIELDS.

Anna Paquin and Holliday Grainger star in TELL IT TO THE BEES, an adaptation of Fiona Shaw’s 1950s set novel of the same title.  The story chronicles the lesbian romance between a single mother who is dealing with the breakdown of her marriage, played by Grainger, and a doctor, returning to her small hometown to take over her late-father’s practice. Directed by Annabel Jankle, the visually captivating TELL IT TO THE BEES was shot entirely on location in Stirlingshire.

WILD ROSE, starring Jessie Buckley and Julie Walters, tells the engaging story of Rose-Lynn Harlan, a Glasgow singer and single mum who dreams of becoming a Nashville star. Scottish Writer Nicole Taylor teams up with director Tom Harper to tell this inspirational musical tale set in the heart of Glasgow. 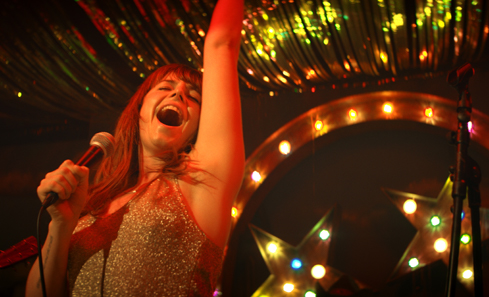 Love, marriage and aspirations collide with history in director Nazilha Arebi’s compelling documentary FREEDOM FIELDS. Produced by the Scottish Documentary Institute and set in post-revolution Libya, it follows a group of women brought together by one dream: to play football for their damaged nation.

Robbie Allen, Senior Screen Executive at Creative Scotland said: “We are enormously excited and proud to see the epic OUTLAW KING receive its Premiere at one of the world's most important film festivals. It’s an incredible achievement for David, Gillian and all involved.

“To then be followed by the World Premieres of yet more exciting films from Scotland, TELL IT TO THE BEES, WILD ROSE, FREEDOM FIELDS, is a testament to the current strength of our filmmaking nation.

“This is an exceptionally positive time for our sector. With increased resources, a strong commitment from partners, and with such an amazing selection of films at this year’s Toronto International Film Festival, this is an ideal time to sell Scotland to the world.”

Culture Secretary Fiona Hyslop said: “OUTLAW KING is a major production for the Scottish screen sector and I am delighted that it will open the Toronto Film Festival showing our rich history, stunning locations and creativity to the world.

“Encouraging film and TV productions to base themselves in Scotland generates significant returns for the Scottish economy and Outlaw King has brought huge benefits to the whole screen industry. Scotland’s film and TV sector is growing. Since 2007 total production spend on film and TV in Scotland has increased by more than 200%."

Also screening at TIFF 2018 is Scottish based director Mark Cousins’ WOMEN MAKE FILM: A NEW ROAD MOVIE THROUGH CINEMA. Produced by Hopscotch films, the documentary celebrates female directors from around the world and will receive its North American premiere on Friday 7 September. Synopsis: The untold, true story of Robert the Bruce who transforms from defeated nobleman to outlaw hero during the oppressive occupation of medieval Scotland by Edward I of England. Despite grave consequences, Robert seizes the Scottish crown and rallies an impassioned group of men to fight back against the mighty army of the tyrannical King and his volatile son, the Prince of Wales. Filmed in Scotland, OUTLAW KING reunites director David Mackenzie (Hell or High Water) with star Chris Pine alongside Aaron Taylor-Johnson, Florence Pugh and Billy Howle.

The film will launch globally on Netflix on Friday 9 Nov 2018.

TELL IT TO THE BEES [FEATURE]

Synopsis: Gripped by a failing marriage and the responsibilities of having a young son, Lydia (Holliday Grainger) finds solace in her growing bond with the town’s new female doctor Jean (Anna Pacquin). But this is the 1950s in a post-WWII rural Scotland, and the womens’ relationship prompts raised eyebrows in their provincial circles. A romance before its time, 'Tell It to the Bees' is a heart-wrenching portrait of a love against all odds.

Synopsis: Rose-Lynn Harlan, 23, is bursting with raw talent, charisma and cheek. She is also fresh out of jail and has two young kids to support. All she wants to do is get the hell out of Glasgow and make it as a country singer. Rose-Lynn thinks her only chance of happiness lies in the Country capital of the world – Nashville, Tennessee. Marion, Rose-Lynn’s mother wants her to settle down, accept her life, and take responsibility for herself, but when a chance encounter brings Rose-Lynn closer to her dreams of Nashville, she faces what she perceives as a choice between family and stardom.

Synopsis: FREEDOM FIELDS follows three women and their football team in post-revolution Libya, as the country descends into civil war and the utopian hopes of the Arab Spring begin to fade. Through the eyes of these accidental activists, we see the reality of a country in transition, where the personal stories of love and aspirations collide with History. A love letter to sisterhood and the power of the “team”.

Creative Scotland is the public body that supports the arts, screen and creative industries across all parts of Scotland on behalf of everyone who lives, works or visits here. We enable people and organisations to work in and experience the arts, screen and creative industries in Scotland by helping others to develop great ideas and bring them to life. We distribute funding provided by the Scottish Government and the National Lottery.