The Strange Case of Dr Jekyll and Mr Hyde is a thrilling new hybrid version of Robert Louis Stevenson’s classic story, conceived and directed by Hope Dickson Leach, adapted from the original novella and relocated from London to Edinburgh. Presented by the National Theatre of Scotland and Selkie Productions in association with Screen Scotland and Sky Arts, this unique new retelling uses innovative theatrical and cinematic techniques to create a live filmic and theatrical experience. Entering a live filmset built within the atmospheric setting of Edinburgh’s historic Leith Theatre, audiences will witness the simultaneous creation and screening in this one-off experience.

Following the final performance on 27 February 2022. The Strange Case of Dr Jekyll and Mr Hyde will be livestreamed to selected Scottish cinemas. The show will then be screened ‘as live’ during the week of 28 February in UK cinemas. The footage captured during the performances will subsequently be edited into a full feature film, which will be broadcast on Sky Arts in 2023.  This will be the first livestream film, created and set in Scotland, to be seen by audiences in Scottish cinemas. Theatrical rights have been acquired by leading film distributor Cosmic Cat, who will be streaming the performance into cinemas across Scotland and the UK.

A cast featuring leading Scottish stage and screen talent has been assembled for this unique project. BAFTA Scotland award winning Scottish actor Lorn Macdonald takes on the role of Utterson. Lorn won the Best Actor Scottish BAFTA award for his portrayal of Spanner in the film Beats. His roles on TV include Bridgerton, Deadwater Fell and Shetland. He has also recently been noted as one of the top 25 theatremakers to look out for in 2022 by The Stage.  Dr Jekyll is performed by Scottish actor Henry Pettigrew. Henry’s screen roles include The Danish Girl as well as TV series The Crown and Guilt. He has appeared in previous National Theatre of Scotland productions Midsummer, Black Watch and Beautiful Burnout. They are both joined by Scottish stage and TV stalwart David Hayman who is playing the role of Sir Danvers Carew. David is a well know actor and director with recent film credits including In Like Flynn and Our Ladies. Peter Singh (Lanyon) has a prolific career on stage and screen, with recent film roles including Cruella and on TV, The Capture I and II (BBC) and Hard Cell (Netflix). 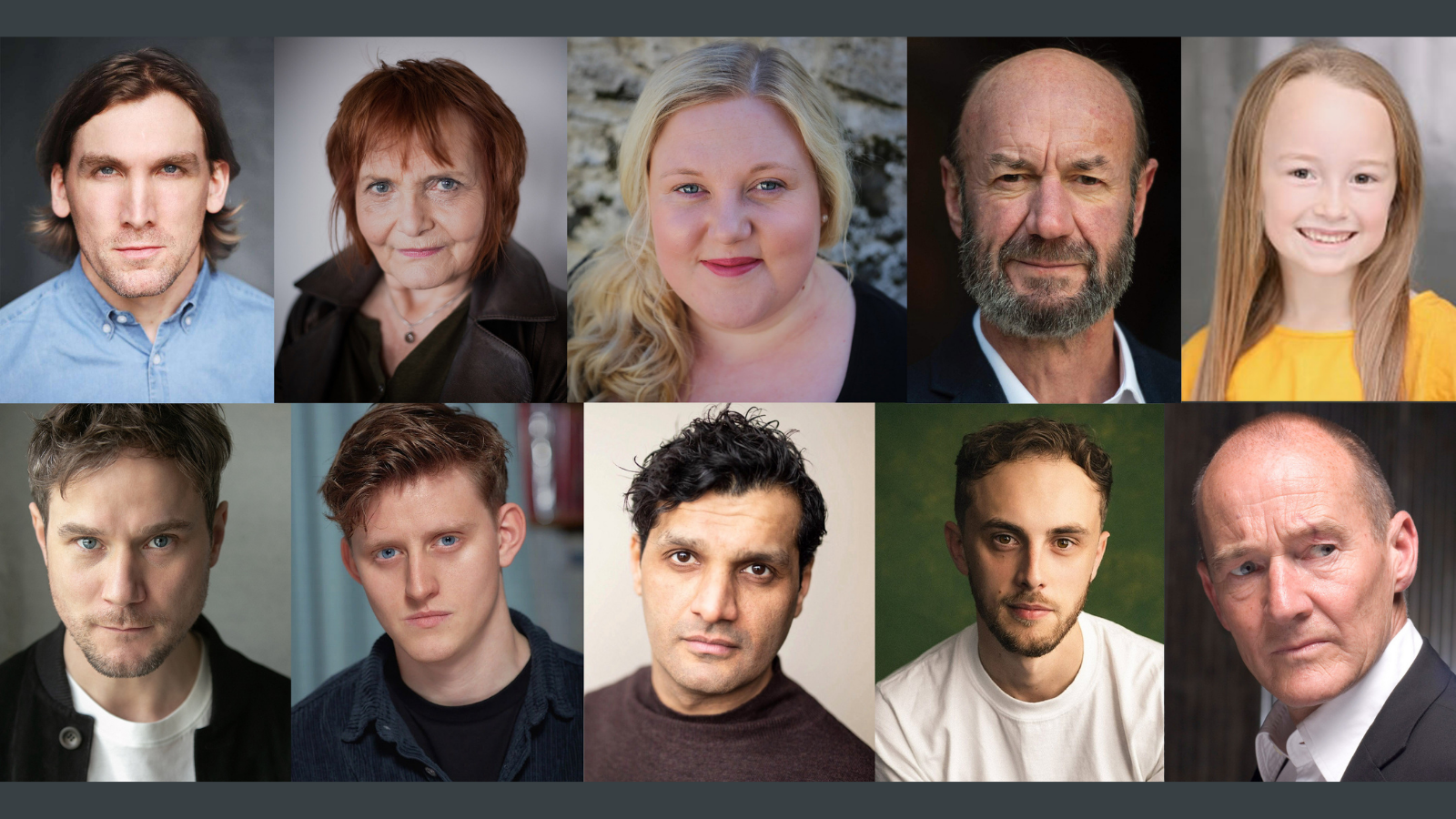 Alison Peebles (Poole) is an award-winning Scottish actor, writer and director. Her film work includes Where Do We Go From Here and Seven Lucky Gods and her TV work spans  CBeebies hit Molly and Mack and River City. Tam Dean Burn (Councillor Begg) is a well known Scottish actor whose recent screen work includes Annika, Victim and Trust Me. Ali Watt (Inspector Hay) has most recently been seen on television in Irvine Welsh’s Crime and onstage at Pitlochry Festival Theatre in several productions including About Love. Scott Miller’s (Tennant) most recent credits include feature film The Road Dance and the tour of Warhorse and The Wife of Willesden at the Kiln Theatre, London, Caroline Deyga (Mabel) has most recently been seen on stage in The Importance of Being Earnest and with the National Theatre in Peter Gynt. She appeared in Our Ladies of Perpetual Succour for the National Theatre of Scotland.

The Strange Case of Dr Jekyll and Mr Hyde by Hope Dickson Leach and Vlad Butucea, returns to Edinburgh born writer Robert Louis Stevenson’s original story which was published in 1886. This gripping new adaptation has been developed with theatre dramaturg Rosie Kellagher. The drama follows Gabriel Utterson as he enters a world of dark duplicity to uncover the identity of the mysterious Mr Hyde and the hold he has over Utterson’s old friend Dr Jekyll.

In this version, Utterson’s journey is set against the background and backdrop of Victorian Edinburgh, where the wealth of the breweries is contrasted with the poverty of the Cowgate Vaults, exposing an underbelly of dark truths and corruption. Concerned by his good friend Dr Henry Jekyll’s recent behaviour, Gabriel Utterson is driven to uncover the identity of the mysterious and dangerous Mr. Hyde, to whom Jekyll is enthralled. Whilst on this search for the truth, Utterson finds himself seduced by the society of Edinburgh’s rich and powerful, but beneath the glossy façade lies a grim and brutal reality. This is a Jekyll and Hyde reworked for a contemporary audience with the themes of power, class and masculinity brought to the fore.

Embracing the duality of the storyline and the period authenticity, the film will be shot in black and white. Both the film and live event will feature new electronic music by DJ and music producer Hudson Mohawke, acclaimed for his genre-smashing" creative approach. 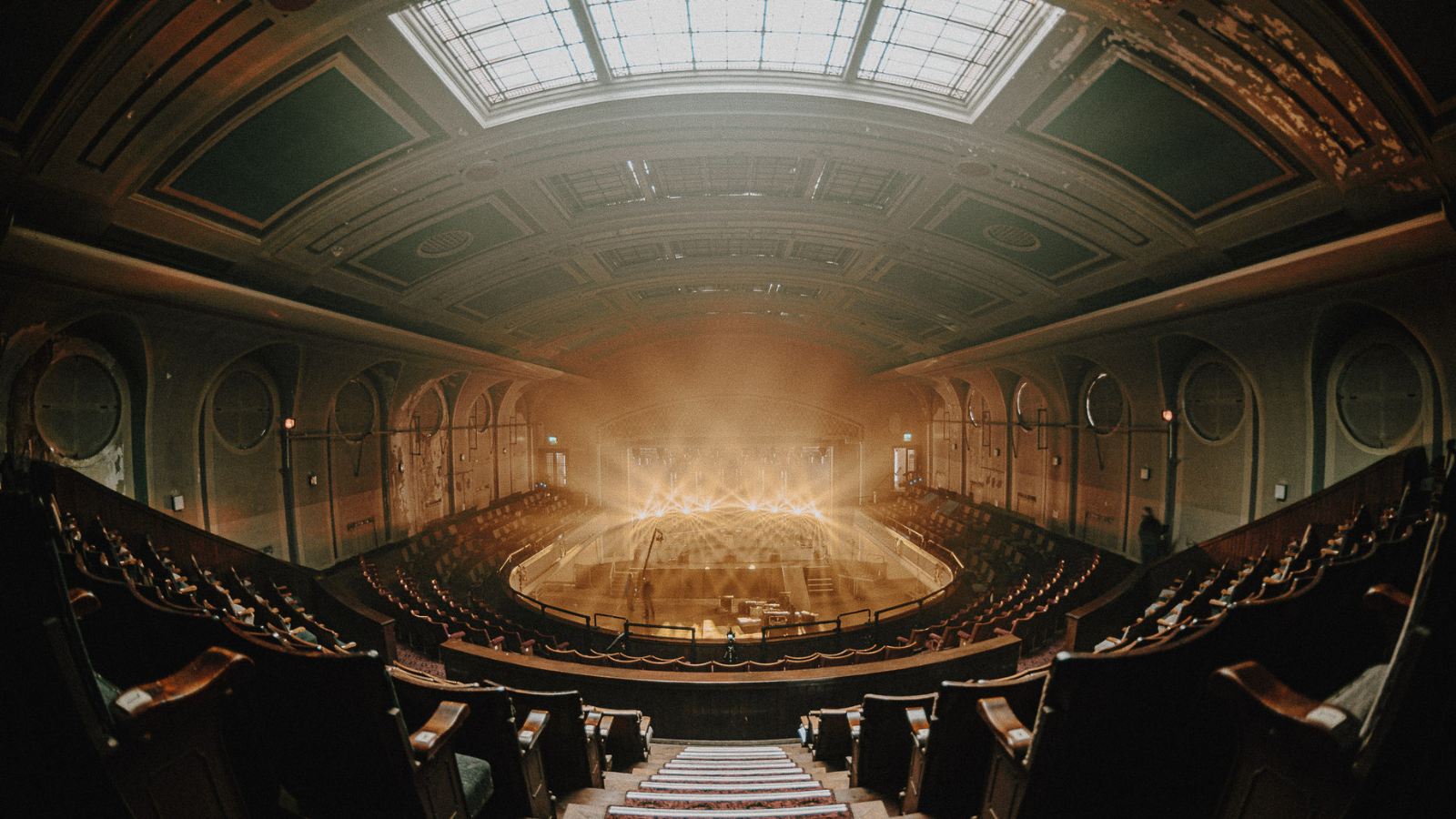 Hope Dickson Leach is an award-winning film maker, based in Edinburgh, whose debut film, The Levelling won her a Scottish BAFTA and the inaugural IWC Filmmaker Bursary Award in association with the BFI. This is her second project with the Company, she also co-conceived and directed Ghost Light with National Theatre of Scotland in association with Selkie Productions. This project reunites her with Vlad Butucea, (one of the writers for the National Theatre of Scotland’s Interference project) and contributing writer on Ghost Light.

The Strange Case of Dr Jekyll and Mr Hyde offers audiences the opportunity to experience a film being created around them, gaining insight into the theatre and filmmaking process. Audience members will wear headsets while watching the drama unfold live on a large screen in the auditorium.

A gothic tale of double lives and inner demons, the storyline is mirrored not only in the hybrid format of the production but in the audience experience at the venue, where they will be able to enjoy bespoke cocktails from the Jekyll and Hyde theatre bars.

Leith Theatre is a legendary music venue, performance space and community resource in the heart of Leith, which was a gift from the City of Edinburgh in the 1920s. Its main auditorium has played host to sporting events, the Edinburgh International Festival and iconic artists and bands. Currently closed to the public, audiences will have exclusive access to the main auditorium during the theatrical film event, and the venue’s historic backstage maze of rooms and hallways will be transformed into film set location scenes of Victorian Edinburgh.

The very first film version of Stevenson’s novel is believed to be a 16-minute-long silent horror film of Dr Jekyll and Mr Hyde made in 1908, based on a stage play. Since then, there have been over 123 films made, from animation to satire to horror, with versions filmed across the world.

Screen Scotland’s support is funded through the Scottish Government and The National Lottery.

All seats for the Live at Leith Theatre production have now been allocated however further production seats may be released closer to the performance date please check the National Theatre of Scotland website for more information.

Cinema Listings for The Strange Case of Doctor Jekyll and Mr Hyde – Live From Leith Theatre stream will be announced on 28 January.

Hope Dickson Leach completed her MFA in filmmaking at Columbia University where she made three short films that played at festivals worldwide. While in New York she was assistant to Todd Solondz on his film PALINDROMES. Hope’s award-winning thesis film, THE DAWN CHORUS, was selected for Sundance, Edinburgh, London and many other festivals. Screen International made her a Star of Tomorrow and Filmmaker Magazine named her one of the ’25 New Faces of Independent Film’. Since her return to the UK, she has made further acclaimed short works for Channel 4, Film London, the UK Film Council, NOWNESS and the National Theatre of Scotland. Her debut feature THE LEVELLING, produced as part the iFeatures scheme (funded by BBC Films, the BFI and Creative England) had its world premiere at the Toronto International Film Festival in September 2016 before screening at festivals all over the world. At the London Film Festival she was awarded the inaugural IWC Filmmaker Bursary Award in Association with the BFI, and in October 2017 she was named a BAFTA Breakthrough Brit. She won a Scottish BAFTA for Best Screenwriter for The Levelling in November 2017. In 2020 she released a new short film, STRONG IS BETTER THAN ANGRY, as part of The Uncertain Kingdom project, and is currently developing several new feature films in the US and UK. In summer 2020 Hope created a film for the National Theatre of Scotland for the Edinburgh International Festival. GHOST LIGHT premiered to five star reviews across the board. Hope is a co-founder of Raising Films, a campaign to make the film industry more sustainable for parents and carers, and is a member of the new National Partnership for Culture in Scotland.

Actor biographies can be viewed on the National Theatre of Scotland website.

The National Theatre of Scotland is dedicated to playing the great stages, arts centres, village halls, schools and site-specific locations of Scotland, the UK and internationally. As well as creating ground-breaking productions and working with the most talented theatre-makers, the National Theatre of Scotland produces significant community engagement projects, innovates digitally and works constantly to develop new talent. Central to this is finding pioneering ways to reach current and new audiences and to encourage people’s full participation in the Company’s work. With no performance building of its own, the Company works with existing and new venues and companies to create and tour theatre of the highest quality. Founded in 2006, the Company, in its short life, has become a globally significant theatrical player, with an extensive repertoire of award-winning work. The National Theatre of Scotland is supported by the Scottish Government. www.nationaltheatrescotland.com

Leith Theatre is a Grade II listed building in Leith undergoing transformative change towards becoming a permanent cultural venue and a home in Scotland for live music and performance. It is in need of significant repair and preservation but even so, plays an important part in Leith’s history, having seen nearly 100 years of change and now being a driver of a future cultural quarter for the area.

Sky Arts exists to bring more art to more people across the UK. In 2020, with the creative industries under serious threat, we threw open our doors to make the channel free for everyone to watch. We’ve redoubled our mission to increase access to the arts and we’re committed to getting everyone involved as the industry recovers. The fact is, we need the arts now like never before, and Sky Arts brings them straight to your living room. We have something for everyone, championing creative talent by showcasing the best in music, theatre, dance, literature, opera and visual art. From Glyndebourne to Grime and Cézanne to The Style Council, we’ve got your passions covered. Millions of viewers tune in to hit returning series such as Portrait Artist of the Year, Urban Myths and British cultural institution The South Bank Show, but our acclaimed new programmes might take you anywhere from Pinter’s house with Danny Dyer to a Scottish road trip with Samuel Johnson.  Collaboration is at the heart of what we do. Sky Arts is the headline sponsor of National Theatre Live in the UK and we work with cultural partners across the country including the English National Opera, Royal Academy of Arts, Tate, Creative Industries Federation and Coventry City of Culture to name but a few. You can watch Sky Arts for free on Freeview channel 11 and Freesat channel 147. If you’ve got Sky or a Now TV entertainment pass, you can also watch over 2,000 hours of shows exclusively on demand.  We’re passionate about supporting the next generation of artists, so we’re working with five leading Sky Arts Ambassadors: Booker Prize-winner Bernardine Evaristo, dance artist Akram Khan, conductor Charles Hazlewood, Theatre Royal Stratford East Artistic Director Nadia Fall, and sculptor Anish Kapoor – to run bursary schemes for new and emerging talent.