Fi Milligan Rennie, Curriculum Manager for Creative Industries Media at Forth Valley College has been appointed Head of Education-Screen at Screen Scotland.

Milligan Rennie takes over, on 7 March 2022, from outgoing Head of Film Education Scott Donaldson who is retiring at the beginning of March after many years with Screen Scotland, Creative Scotland and its predecessor Scottish Screen. 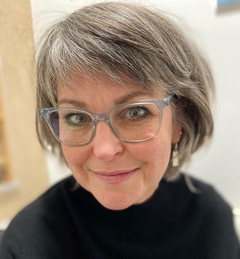 Fi Milligan Rennie said: “I am delighted to be joining Screen Scotland as Head of Education at such an exciting time for Scotland’s Screen Industries. I look forward to building on the successes of Scott and the Film Education Team and forging new connections and education pathways for Moving Image Education in Scotland. It will be a joy to work with wealth and breath of talent and commitment that exists across Creative Scotland.”

In her new role, Milligan Rennie will lead Screen Scotland’s work to advocate for film, TV and moving image to be further woven into the fabric of school age children’s education and deliver a programme in partnership with the education sector, so Scotland’s young people can fully engage with film, TV and the moving image and in so doing, develop creative thinking and expression, awareness of the role of storytelling in a variety of social and media contexts and how screen practices can be part of a wide range of careers.

David Smith, Director of Screen at Screen Scotland said: “We’re so pleased to welcome Fi Milligan Rennie to our brilliant team. Fi’s extensive and diverse experience across the screen and creative industries and within the education sector will be incredibly useful. The huge increase in production in Scotland has brought into sharp focus the need for better film education in schools. We want to show children and young people from all backgrounds and parts of the country that there is a place for them in the screen industry and they can have a fulfilling career right here in Scotland.

“We also wish Scott Donaldson very well on his retirement. I want to thank Scott for all of his hard work in this role – and as Acting Director of Screen Scotland across 2018/2019 - over the years and for leaving film and moving image education across Scotland in such good stead going forward. His work across the sector has been invaluable.”

Screen Scotland is driving the cultural, social and economic development of all aspects of Scotland’s film and tv industry through enhanced funding, services and support with backing from Scottish Government and The National Lottery.  Screen Scotland sits within Creative Scotland and works in partnership with Scottish Enterprise, Highlands and Islands Enterprise, Skills Development Scotland, Scottish Funding Council to ensure the sector’s continued growth. screen.scot  / Twitter / Instagram. Learn more about the value of art and creativity in Scotland at www.ourcreativevoice.scot