The Writers Lab UK & Ireland has announced its selection of mentors, winners, finalists and semi-finalists for its inaugural lab that supports women-identifying writers over 40.

In what is the first writers lab for women and non-binary writers over 40 in the UK and Ireland, this is a unique opportunity to discover exciting writers from across Scotland, England, Ireland, Wales and Northern Ireland, and to nurture talent with leading film and TV industry mentors. The final selection represents a thoughtfully curated and intersectional range of voices to ensure diverse narratives, by writers who will no doubt go on to shape the future of the film and TV industry.

The lab will take place virtually, 10-13 June 2021, with leading screenwriters and producers including Kayleigh Llewellyn (In My Skin) and Lindsey Dryden (Unrest, Trans in America) with sessions continuing for 5 months post lab. Submissions covered a wide range of genres and subject matter, in both feature and pilot formats (both 1-hour and 1⁄2-hour), reflecting stories from all over the UK and Ireland. The Writers Lab UK & Ireland is dedicated to matching talent with industry veterans to elevate the work of women screenwriters in their prime through mentorship, advocacy and exposure.

Untamed Stories, UK partners to The Writers Lab said: "We are totally blown away by the sheer calibre of talent that has submitted to The Writers Lab UK & I; the breadth of stories, styles and vision has been a wonder to uncover. In bringing this Lab across the pond with the incredible co-founders Nitza and Elizabeth, we always knew that it was important to us all that we structure it in a way to ensure access for a truly diverse range of writers from across all regions of the UK and Ireland.

Support from the screen agencies, Dirty Films and Birds ́Eye View enabled us to reserve spaces for participants based in Wales, Ireland, Northern Ireland and Scotland, as well as England. In doing this, we've found a myriad of narratives from women over 40 whose voices need amplifying, and we're so excited for the participants and finalists to embark on this journey. With such a stellar array of mentors and programming we know their pathways will be fruitful, hoping to create big shifts in the industry and act as an intervention."

The Writers Lab US, Co-founders said: “We were astounded by the enthusiasm that greeted us - from the partners, funders and mentors who are making this possible, to the submissions that were shared with us... the volume, the caliber of the writing, the range of stories, the passion and vision in them. We feel humbled and honored to be welcomed so warmly and we look forward to digging into the work ahead.”

The Writers Lab UK & Ireland 2021 mentors and guest speakers include: 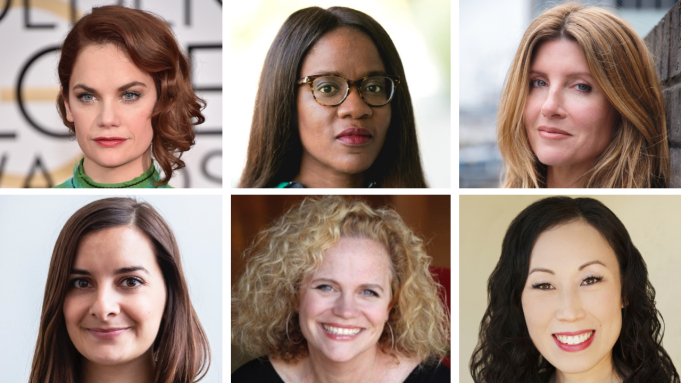 Alice Clark, The Munitionettes, Scotland, 1-hour Drama
An all-female soccer team, formed in a WW1 munitions factory, confronts prejudice and scorn while fighting for freedom on and off the pitch.

Dorothy Jane Stewart, The Story of Me and You, Scotland, Feature, Drama
When a disgraced, alcoholic doctor meets a pregnant teenager suffering from domestic abuse, they embark on a relationship that could lead to the redemption or death of them both.

Claire Barclay, Return Her, England, 1⁄2-hour Drama
A Māori Rhodes scholar vows to take down an aristocratic English family when they refuse to stop exploiting her ancestor's image. Today she’s taking back the painting ... tomorrow she’s coming for their stately pile.

Angela Franklyn, Mozart’s Don Jane, England, Feature, Drama
Faced with the possibility of never singing again after transitioning into a man, a famous soprano is forced to face demons of the past to find his new voice.

Kit Hui, Black Dust, England, Feature, Drama
A Chinese woman searching for her missing husband as she tries to hold her family together slowly comes to terms with the fact she never really knew the man she had married.

Rachel Mars, Slacks, England, 1⁄2-hour Comedy
On the cusp of settling down with her perfectly ok boyfriend, a woman teams up with her dying grandmother on a journey of Queer family discovery.

Catherine McGrotty, Off Season, N. Ireland, 1⁄2-hour Fantasy
When Rowan Drury wakes up in an ice bath, with a hand-sewn wound under her ribs, she's eerily certain nothing has been taken from her. She's had something put in.

Anna Merritt and Deborah Wiseman, Is This It?, Ireland, 1⁄2-hour Comedy
When four frustrated middle-aged women, all on the cusp of cracking up, are forced together on a kooky self-help programme, they detest one another until they realise just how much they need each other.

Lydia Mulvey, Solas, Ireland, 1⁄2-hour Sci-fi
With the world plunged into darkness after climate-change scientists accidentally block out the sun, a woman with a deadly photo-sensitivity on a remote Irish island embarks on a dangerous journey in search of her missing daughter, which takes her deep into the world of a crazed solar physicist who is obsessed with bringing back the light.

Sylvia-Anne Parker, 600 Steps, England, Feature, Drama
A young African woman searching for her abducted sister and a British single mother looking to get her life back on track unwittingly put themselves in danger when they expose a people trafficking organisation in the heart of London.

Leyla Pope, One Last Holiday, Wales, Feature, Drama
Rivers and rapids, friction and families – an Anglo-Iranian family embark on a canoe trip in France, but will this be their last holiday ever?

Ali Taylor, My Boy, Scotland, 1-hour Drama
When her teenage son is accused of rape, a health visitor is torn between her boy and her beliefs.

About The Writers Lab UK & Ireland

Created by TWL co-founders Elizabeth Kaiden and Nitza Wilon with Julia Berg and Ruth Spencer of Untamed Stories, and developed with support from New York Women in Film & Television, The Writers Lab UK & Ireland is dedicated to developing narrative scripted content by diverse women and non-binary writers over the age of 40 in the UK and the Republic of Ireland. We are industry veterans who elevate the work of women screenwriters in their prime through mentorship, advocacy and exposure.

Dirty Films is an independent film and television production company, whose partners are Cate Blanchett, Andrew Upton and Coco Francini. Most recently, Dirty Films executive produced Christos Nikou’s Apples, which has since been named one of the year’s Best International Films by the National Board of Review. It was also Greece’s official submission for the Best International Feature for the Academy Awards. Blanchett and Francini produced the 10-time EMMY-nominated Mrs America, which was just named one of 2020’s Best Television Shows by the American Film Institute. Dirty Films also produced the 13-time AACTA-winning series Stateless, which Blanchett also co-created. Other film credits include Truth, Carol, Little Fish and The Turning. Dirty Films has a first-look film deal with New Republic Pictures and a first-look television deal with FX. Upcoming film projects include: Fingernails with Director Christos Nikou; Queen Bitch and the High Horse with Directors Bert and Bertie; and the feature documentary Burning with Director Eva Orner.

Now in their 18th year, Birds’ Eye View continues to support women of all ages working in film through advocacy, investment, mentoring and events. Their British Film Institute funded RECLAIM THE FRAME mission raises awareness around new and classic films by women online and in cinemas (when they’re open!) - spotlighting many remarkable female stories and important social, cultural and ethical issues - ranging from women’s art and literature to indigenous and disability rights to dementia and AI.

New York Women in Film & Television (NYWIFT) advocates for equality in the moving image industry and supports women in every stage of their careers. As the preeminent entertainment industry association for women in New York, NYWIFT energizes women by illuminating their achievements, presenting training and professional development programs, awarding scholarships and grants, and providing access to a supportive community of peers. NYWIFT brings together nearly 2,500 women and men working both above and below the line. NYWIFT is part of a network of 50 women in film chapters worldwide, representing more than 15,000 members. NYWIFT is a nonprofit 501c3 public charity.