Launch! On the Sea with Scotland’s Lifeboats – a new release of archive film and video celebrating RNLI communities across Scotland – will finally kick off its major Scottish big screen tour by premiering at Mareel in Lerwick, Shetland on Sunday 20 June 2021 at 2pm before visiting cinemas and community halls in lifeboat communities across Scotland throughout the rest of the year.

Directed, researched and edited by Shona Thomson in a co-production with Screen Argyll, the film has been two years in the making with unprecedented access to the RNLI’s own archives. 1920s film footage of lifeboats sourced from the National Library of Scotland Moving Image Archive is woven with 1960s colour promotional films and breath-taking digital video captured by RNLI crews’ 21st century helmet cameras whilst out on the wild sea.  Launch! is supported by EventScotland as part of Scotland’s Year of Coasts and Waters, by The National Lottery and the Scottish Government through Screen Scotland, and Film Hub Scotland, part of the BFI’s Film Audience Network. 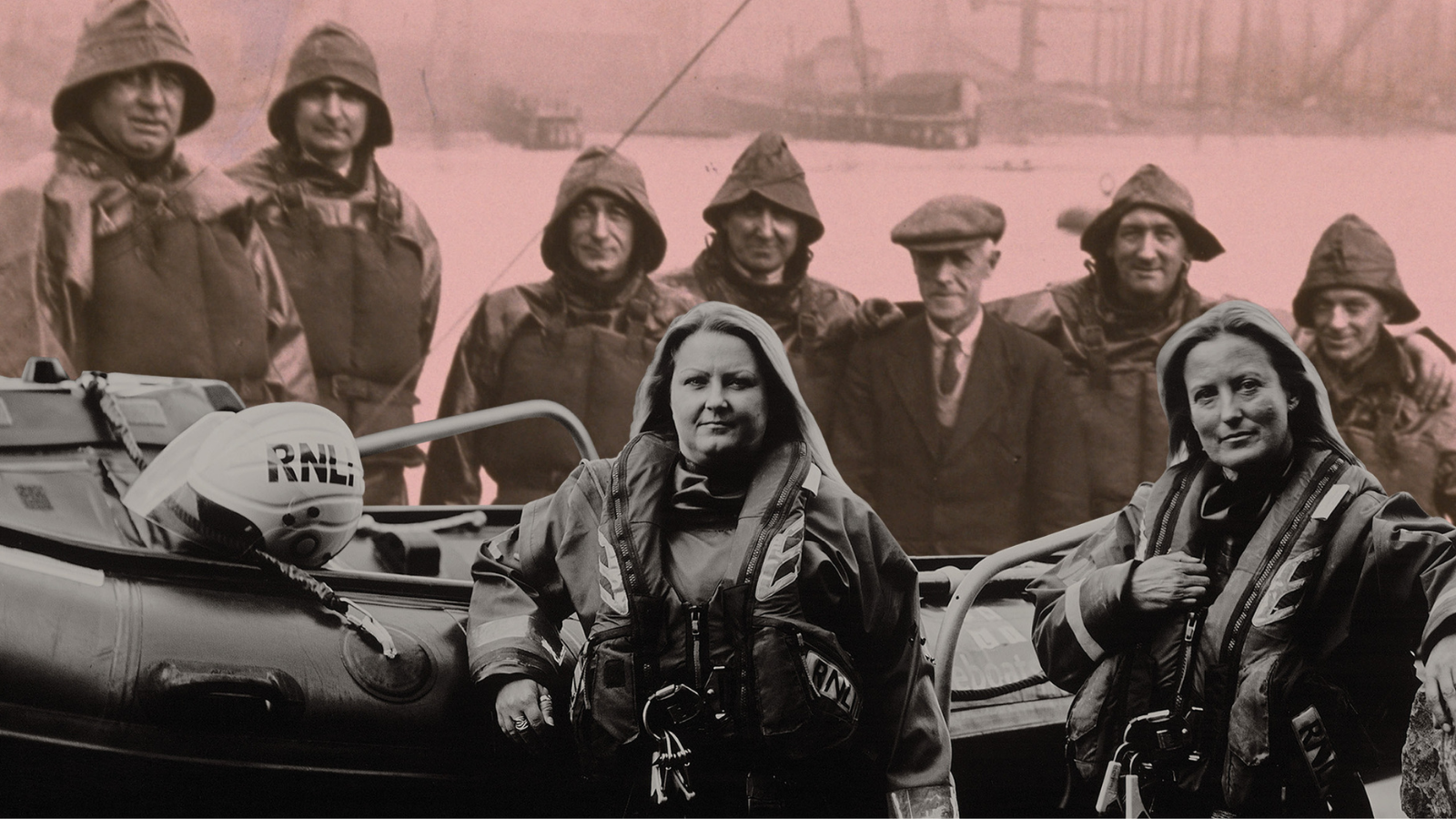 Launch! features a brand new immersive 5.1 surround soundtrack – designed specifically to be experienced in the cinema – composed and recorded by John Ellis (who has played and recorded with Tom Jones, Lily Allen, James Yorkston, John Squire and The Cinematic Orchestra), Arun Ghosh (APPJA Jazz Instrumentalist of the Year), Jason Singh (sound artist and nature beatboxer known for regular appearances on Springwatch, Countryfile and BBC 6 Music), and Jenny Sturgeon (acclaimed singer-songwriter whose recent project The Living Mountain is a collection of songs and films inspired by Nan Shepherd). Bringing the musicians together whilst in lockdown through pioneering online mixing software was the soundtrack’s producer David McEwan (who has collaborated with Nitin Sawhney, Jeff Beck, and Sting).

Reflecting modern volunteer lifeboat crews, Launch! also features images of the women who save lives at sea in Scotland. These were taken using glass plate photography by Jack Lowe as part of The Lifeboat Station Project – Jack’s eight-year mission to photograph all RNLI lifeboat stations in the UK.

The Scotland-wide tour will open at the newly re-opened Mareel in Shetland. Footage of both the Lerwick and Aith RNLI crews feature in the film alongside big screen appearances from 30 other lifeboat crews. Cinemas and film clubs are being encouraged to arrange a screening of Launch! in their community alongside special guests and discussions to support the local community’s lifeboat station.

The film’s director and award-winning curator of A Kind of Seeing, Shona Thomson said: “It’s been quite a journey but I’m grateful everyone involved in Launch! has sustained that passion for sharing the incredible work of the RNLI with audiences who want to come back together and return to their local cinemas. I feel honoured that the RNLI generously opened up their archives to me. With a beautiful soundtrack that intertwines sensitively with the archive images, Launch! is an atmospheric film made for the big screen that I hope cinemagoers will enjoy as it truly does take a community to launch a lifeboat.”

Jason Singh, who collaborated with Shona on their successful Following the Fleet UK tour in 2017, said: “Creating the soundtrack for Launch! was an incredible experience. We had a dream team of creative and technical virtuosity and wanted to create a score that honoured the emotion and power of the footage and that of the work of the RNLI. We also wanted to bring together acoustic and electronic musical worlds to reflect tradition and also modernity. I hope people get to experience the amazing work that the RNLI and the wider communities have done over the years.”

Roger Lockwood CB, Chair of the RNLI Scottish Council, said: “This is a truly unique and exciting opportunity for audiences to see for themselves the operations of the RNLI in Scotland.  Scotland's 46 lifeboat stations provide coverage for some of the most dangerous coastal waters in the world - used not just for leisure or transport, but also for people's essential livelihood.  I am delighted that through Launch! a wider public will be able to appreciate the selflessness of our Lifeboat volunteers who put their own lives at risk to save others.”

Paul Bush OBE, Director of Events at VisitScotland, said: “We are pleased to be supporting Launch! On the Sea with Scotland’s Lifeboats as part of Year of Coasts and Waters 20/21. Scotland offers the perfect stage to celebrate our coastal and cultural traditions and this event will combine music and film to shine a light on the vital work of the RNLI and lifeboat communities.”

Sambrooke Scott, Head of Audience Development at Screen Scotland said: “Launch! is a thrilling and vivid fusion of archive film from the rich history of the RNLI with contemporary music by some of the UK music industry’s most exciting artists, brought together by Shona Thomson, one of our best cultural producers. It promises to be a truly unique experience that deserves to be seen on the big screen, and what better setting for its premiere than Mareel, Scotland's most northerly cinema. Screen Scotland is a very proud supporter of the project and look forward to it touring Scotland later this year.”

Nicola Kettlewood, Manager at Film Hub Scotland said: “It is fantastic news that Scottish cinema audiences will at long last have the opportunity to experience Launch! on the big screen. A treat for the senses, this affecting film tells a story of bravery, ingenuity and community through a skilful blend of archive film and video with a spirited original soundtrack.”

Tickets for the Launch! premiere at Mareel in Lerwick Shetland on Sunday 20 June at 2pm will be available from 10am on Friday 4 June.  They can be booked online at shetlandarts.org, in person at Mareel’s Box Office, or over the phone on 01595 745500.

Cinemas, film clubs and community groups can contact the Launch! team to arrange a screening of the film (supported by the film’s accompanying marketing pack) during June to December 2021 through the project website: launchonthesea.com.

Shona Thomson is an award-winning independent creative producer and curator based in Edinburgh and through A Kind of Seeing she’s presented live cinema events reaching over 8000 people across the UK and internationally. Driven by a passion for connecting people and places with their heritage, Shona has been producing and curating film events, festivals and tours for over 20 years, including a long association with the Edinburgh International Film Festival, new commissions for the Glasgow Film Festival, and producing the first five years of the Hippodrome Silent Film Festival, Scotland's only event dedicated to silent film with live performance.  akindofseeing.co.uk / Twitter: @urbantwitcher / Facebook

Screen Argyll supports all forms of film exhibition, promotion and engagement throughout Argyll, providing opportunities for remote communities to connect through film with the widest possible audience. Digital technologies and film offer people and communities new opportunities to tell their stories, develop skills and open doors to careers in a growth industry. screenargyll.co.uk / Twitter: @screenargyll / Facebook

Launch! On the Sea with Scotland’s Lifeboats is supported by:

Scotland’s Coasts and Waters will be showcased throughout 2020 and 2021 and celebrated with a programme of activity designed to support the nation’s tourism and events sectors. The year, led by VisitScotland will sustain and build upon the momentum of Scotland’s preceding Themed Years to spotlight, celebrate and promote opportunities to experience and enjoy Scotland’s unrivalled Coasts and Waters, encouraging responsible engagement and participation from the people of Scotland and our visitors. A year-long programme of events, activities and ideas will shine a spotlight on the impact our waters have had on Scotland, from the formation of beautiful natural features to the creation of our national drink – whisky. Following an industry consultation, the Themed Years will now take place every second year to enable more time for planning and collaboration. 2022 will celebrate the Year of Scotland’s Stories. Join the conversation using #YCW2021.

Screen Scotland is the dedicated partnership for screen in Scotland. With funding from Scottish Government and the National Lottery, Screen Scotland is driving the cultural, social and economic development of all aspects of the sector in Scotland, through enhanced funding, services and support. Screen Scotland sits within Creative Scotland and is a partnership with Scottish Enterprise, Highlands and Islands Enterprise, Skills Development Scotland, Scottish Funding Council, working in close collaboration with the sector to ensure its success. screen.scot  / Twitter: @screenscots / Instagram: @screenscots

Film Hub Scotland is led by Glasgow Film, funded by BFI and Screen Scotland. As part of the BFI's Film Audience Network, they are one of eight Hubs set up across the UK to extend film choice, increase and broaden film audiences, and enhance opportunities for audiences to engage with and learn about film.  filmhubscotland.com / twitter: @filmhubscotland / Facebook