Film Fest in the City in St Andrew Square Gardens returns as part of the Edinburgh International Film Festival programme on the festival’s opening weekend from Friday 12th to Sunday 14th August. The free outdoor screening programme of new and classic cinematic favourites reflect the wider EIFF 2022 themes, including a celebration of Scotland’s Year of Stories 2022.

On Friday 12 August, EIFF tips its hat to the Edinburgh International Book Festival with a day of films that all started in the twinkle of an author’s eye. The day will also feature a selection of short films with a Scottish connection, screened before feature films and presented in celebration of Scotland’s Year of Stories 2022 as Scotland’s Stories on Screen.

On Saturday 13 August, also celebrating Scotland’s Stories on Screen, Film Fest in the City programme will fill the square with homegrown storytellers and some family fun, including a special live musical performance to accompany the anniversary screening of the 1922 classic Rob Roy and more short films with a Scottish connection. All this alongside the family favourite WALL-E, followed by the recent blockbuster, Free Guy.

Sunday 14 August sees EIFF Youth Programmers from Edinburgh and Aberdeen take over the square with a selection of favourites including Twilight, Big, Shrek and Whip It to celebrate big screen favourites all directed their favourite female directors. 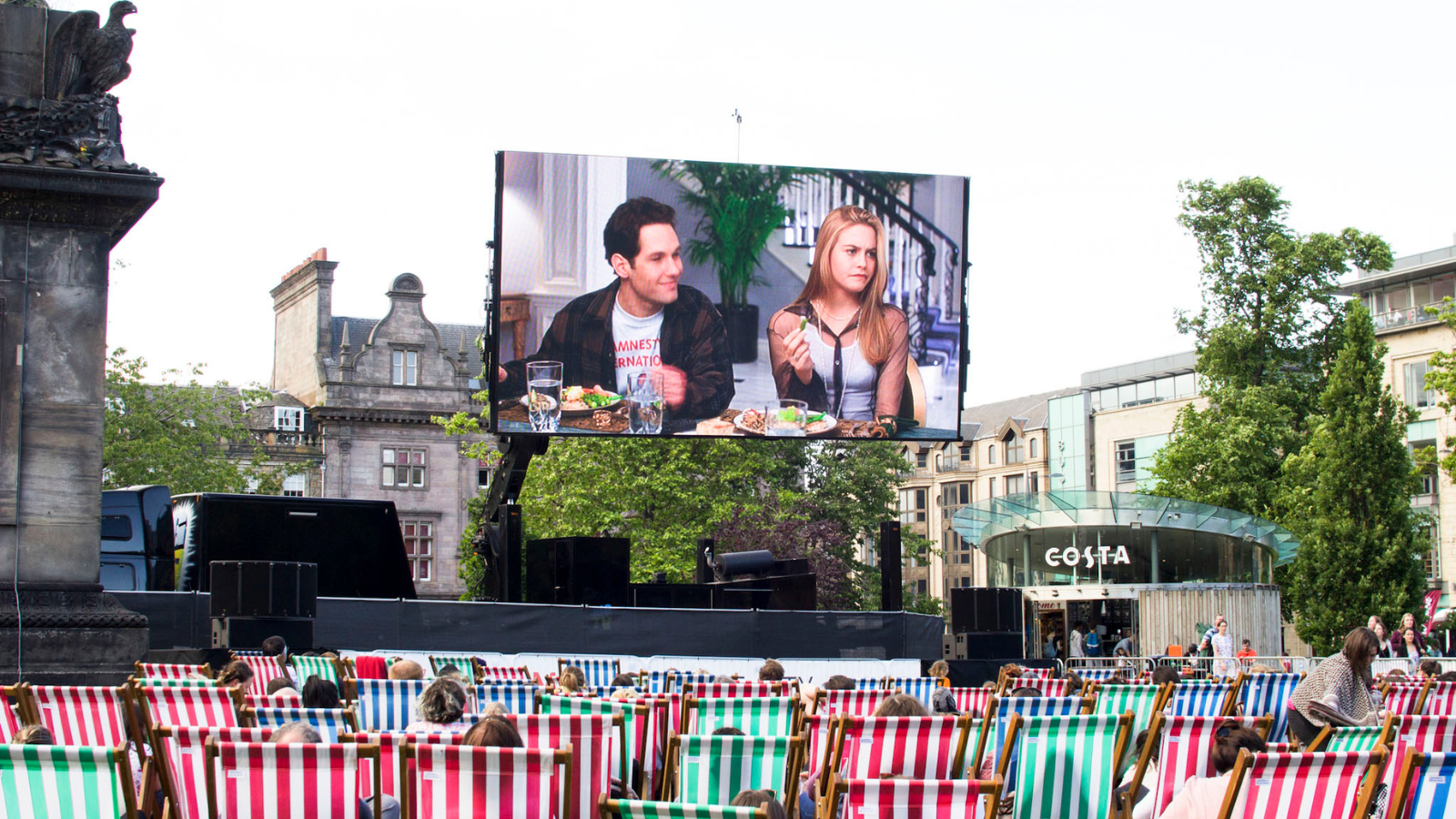 Clueless on outdoor screen at previous year's Film Fest in the City. Courtesy of EIFF.

As a nod to EIFF’s closing night film, After Yang, the Film Fest in the City screen explore the idea of Artificial Intelligence on screen. For sci-fi purists out there there’s Stanley Kubrick classic, 2001 A Space Odyssey. If you like you’re A.I all singing, all dancing, don’t miss everybody’s favourite Pixar robot Wall-E or maybe you just want to spend Saturday night with Ryan Reynolds then don’t miss Free Guy.

This special open-air series of screenings coincides with the main programme of full in-person cinema screenings as part of the 75th anniversary of the city’s International Film Festival, giving the Film Festival an East-to-West city centre presence and making cinema accessible to both film buffs and Edinburgh residents of all ages. Attending audiences can look out for lots of special surprises at each screening too.

These events are free. Film times and details of accompanying activities can be found by visiting www.edfilmfest.org.uk.

Audiences will enjoy the outdoor screenings with an amazing range of food and drink produce available to purchase on site, including EIFF Official Beer Partner Innis & Gunn. Heritage gastropub The Voyage of Buck will be have a bar on site which will be focusing on Lind and Lime Gin cocktails including collins and spritzes featuring summer flavours with London essence tonics and sodas. 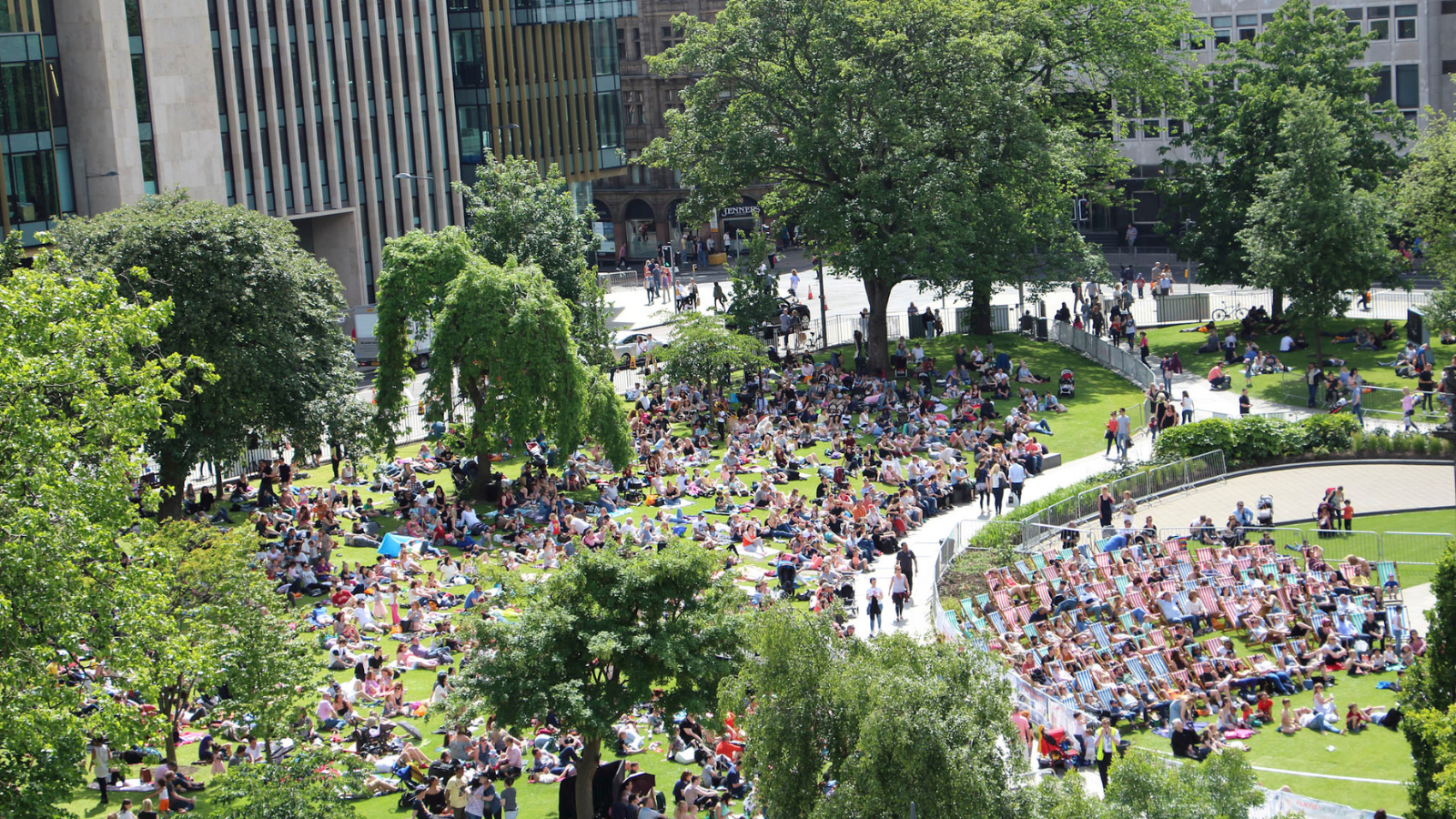 Previous year's Film Fest in the City. Courtesy of EIFF.

Film Fest in the City programme

Everyone’s favourite bear in his first big screen adventure as he travels from deepest darkest Peru to London to try and find himself a new home.

Ewan McGregor stars as a now-grown-up Christopher Robin who is visited by Winnie the Pooh to help find his lost friends in the Hundred Acre Wood.

One of the greatest cinematic experiences of all time. Stanley Kubrick’s journey into space is designed for the big screen.

Follow Princess Merida as she forges her own path in Disney and Pixar’s journey into the mythical Scottish kingdom of DunBroch. Pre-screening family entertainment, including face-painting.

Based on the story by Jacques Tati, this beautifully animated tale tells of a French illusionist who travels to Scotland, where he meets a young woman where their exciting adventures together change both their lives forever. Pre-screening family entertainment.

Join us for a special live musical performance to accompany this impressive 1922 classic film.

An all singing, all dancing modern classic from Pixar.

Join a whole host of fairy tale characters in this animated, tuneful and funny animated adventure.

Tom Hanks reconnects with his youth in this 80s family classic.

Get your skates on and join Babe Ruthless and the roller-derby team in this funny and quirky drama.

Also screening later in the festival in celebration of the Scotland’s Year of Stories 2022 will be Yoyo & The Little Auk (2022 / dir. Dougie Irvine) screening on 20 August. Please check EIFF website for venue details. Introduce young children to the magic of classical music with a new and inspiring Scottish animated adventure from the Royal Scottish National Orchestra. Perfect for Nursery to P2 children (age 3-6).

Kristy Matheson, Creative Director of EIFF and Film Fest in the City said: “We are delighted to be able to present such a fantastic programme of free events for Edinburgh residents and visitors alike to enjoy on our opening weekend. These great films correspond with our wider EIFF themes – our celebration of female directors and Scotland’s Year of Stories 2022, among others – and we are sure everyone will find something in the programme that they will enjoy. See you in August in the beautiful surroundings of St Andrew Square for a weekend of pure cinematic entertainment!”

Inspired by the unique identity of Edinburgh and our love of film, EIFF connects audiences with essential storytellers. Intimate in scale, ambitious in artistic scope, EIFF is your annual celebration of screen, at the heart of a global cultural gathering. On our 75th anniversary, EIFF returns to the Scottish capital’s summer festival season, to centre film as a major art form within this vibrant, cultural conversation and invite audiences, artists, and innovators to imagine new worlds with us.

About Scotland’s Year of Stories 2022

Scotland’s Year of Stories 2022 will spotlight, celebrate and promote the wealth of stories inspired by, written, or created in Scotland.

Led by VisitScotland, the Year of Stories 2022 will sustain and build upon the momentum of preceding Themed Years, showcasing a nationwide programme of major events and community celebrations.  From icons of literature to local tales, Scotland’s Year of Stories encourages locals and visitors to experience a diversity of voices, take part in events and explore the places, people and cultures connected to all forms of our stories, past and present.

Scotland’s Year of Stories will encourage responsible engagement and inclusive participation from the people of Scotland and our visitors. Following an industry consultation, Themed Years will take place every second year to enable more time for planning and collaboration. The next Themed Year will take place in 2024.