TLK Productions in collaboration with Screen Education Edinburgh launched a shadowing scheme in April 2021, giving 15 trainees experience working on a professional film set. The shadowing scheme supported by Screen Scotland gave the selected trainees the chance to spend a day shadowing various departments on Stephen Frears' latest film, The Lost King, to get a taster of the industry.

The comedy-drama shot in April, May, and June this year in and around Edinburgh with streets being closed across the city to enable filming. As well as one of the producers, the film is co-written by and stars Steve Coogan with Sally Hawkins and Harry Lloyd, and is based on the true story of the discovery of King Richard III's remains in a Leicester car park in 2012.

The shadowing scheme provided the exciting opportunity for those aged 18 and over living in Edinburgh and the Lothians to gain an insight into the film industry. The scheme encouraged applicants from currently underrepresented groups in the screen industry in Scotland, allowing them to develop the screen skills required for a successful career within the sector. 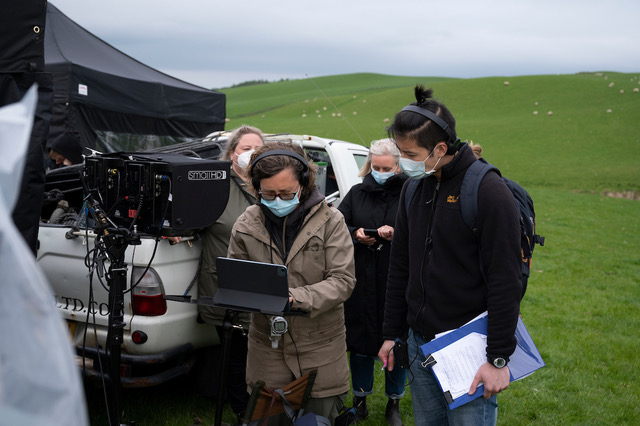 Trainee Max Chan on set for The Lost King with Script Supervisor Lucy Enfield and the Costume and HMU designers.

The Lost King co-producer, Wendy Griffin, one of the scheme’s creators, said: “Training is key for our industry especially at the moment and bringing in new people who otherwise might not get the chance, to get a taste of a professional set at this level is a great way to increase and diversify the talent pool. It was thus fantastic to get the support of Screen Scotland and Screen Education Edinburgh in running this scheme on The Lost King.”

Graham Fitzpatrick, Development Officer, Screen Education Edinburgh commented: “partnering with Wendy and The Lost King team on such a vital new development supported by Screen Scotland both complemented and enhanced our year-round work developing people in filmmaking. Chosen from 112 applicants, the trainees included those ethnically diverse, people in receipt of benefits, those living with disabilities, and a gender split in favour of female participants, meeting both the core aim of our organisation that filmmaking is accessible to all, and a fast-growing industry that aims to prioritise entry for underrepresented groups in the years ahead”

The success of the scheme has been reiterated through feedback from the trainees who have emphasised the practical skills and knowledge the initiative provided them, giving them insight into what a career in the film and TV industry looks like.

Read below the experiences of Max Chan and Emily Wallace who shadowed the Continuity and Electrical departments respectively as part of the scheme.

What was the highlight for you working on the TLK shadowing scheme?

Max: My highlight on the TLK shadowing scheme was definitely the opportunity to observe closely how a professional movie set works. I still remember how amazing it felt to meet the crew and eventually becoming part of it. The experience was truly eye-opening, and no amount of research can replace this shadowing opportunity.

Emily: The highlight for me was being able to talk to so many different people on the set. I was able to talk to producers, members of the camera department, the DIT, as well as the whole lighting team and see how their jobs differed depending on shooting conditions, locations, time constraints, and so much more. I learnt more on the TLK shadowing scheme than I could have possibly learnt on my own.

What is something you learnt/skill you acquired while working on the scheme?

Max: The biggest thing that I've learned is the role and responsibility of a Script Supervisor on set - from taking notes on each single shot for continuity and communicating with the director/actors, to getting the slate, cameras, lens' info from different members of the crew. There's simply too much to learn, so I was still learning a lot at the end of the working day. In addition, I have also learned the importance of communication on set - good communication makes the process of shooting more effective and less stressful!

Emily: I learnt simple but important skills such as how to tie knots, coil cables, and communicate effectively with a team on a set. I loved how I could learn real practical skills by watching, practising, and then doing as this meant that I not only was learning new skills to use in the future, but I was also contributing something to the film itself!

Has the scheme influenced what career path you want to take?

Max: The scheme provided me with great hands-on experience of being a Script Supervisor. I would love to work as an Assistant Director/Script Supervisor while continuing to make more short films when I can as a Script Writer/Director.

Emily: The shadowing scheme has demystified the many different roles on a film set for me as well as introduced me to some roles I didn't even know existed! It has reaffirmed to me that I want to work in film & television, and I am excited to use some of the knowledge and practical skills I learnt on the shadowing scheme to further explore the industry! 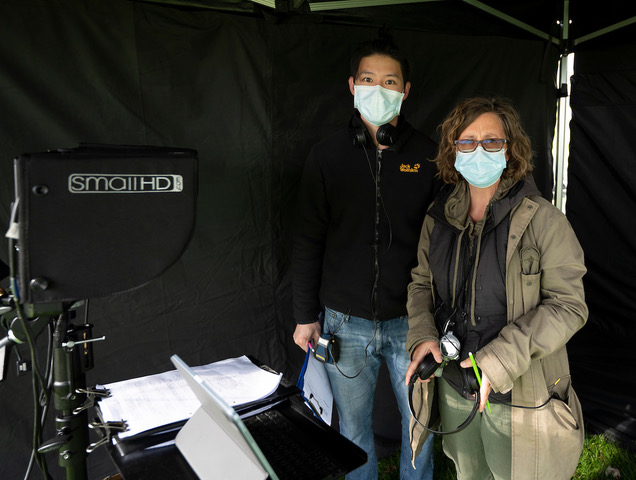 Max Chan and Script Supervisor Lucy Enfield on set for The Lost King.

Visit Screen Education Edinburgh’s website to find out more about the film learning, training, and production programmes they provide for people of all ages in Edinburgh and surrounding regions.

The Lost King will be released across the UK in 2022.